Welcome to Our Parish We were blessed to celebrate the Lord's Nativity this January 7th, followed immediately by Sunday after Nativity and our Very Rev. Fr. David's nameday. Many thanks to Nichole & Pavel L’vov who again opened their home for St Elizabeth’s Annual Christmas Party on Sunday after Nativity. It was a wonderful day of celebration and fellowship for all of us. May the Lord bless them! 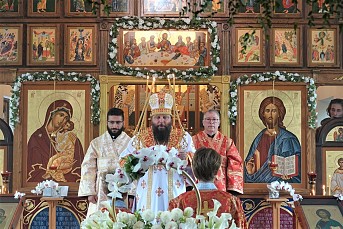 We celebrated a Hierarchical Divine Liturgy on the Feast of our heavenly Patroness, the venerable Martyr Grand Duchess Elizabeth and the 24th anniversary of the founding of our parish. We were blessed and honored with the visit of Bishop Nicholas of Manhattan on this special day as he ordained our new Deacon Father Michael and tonsured Reader Timothy. Special thanks to all that helped with cleaning, decorating and setting up the trapeza and donating. S Prazdnikom!

The State of New Jersey has lifted the indoor mask and six-foot social distancing requirement for both indoor and outdoor spaces, including religious services and activities. St Elizabeth's Church is now observing these new State guidelines. In our Parish, face coverings and social distancing may be used or not at each person’s discretion. Limited attendance and online sign-up for services have been discontinued. St Elizabeth's will continue to livestream our services to an outdoor screen for those who would still like to maintain social distancing. St Elizabeth's Church is not interested in knowing the vaccination status of any parishioner or visitor. That is entirely private. It is also important that parishioners themselves not inquire into anyone's vaccination status at church. St Elizabeth's wants to make every person feel welcome to attend services and fellowship events with us. We ask that everyone respect the privacy of others and the choices that individuals make regarding masks, social distancing, and vaccination.